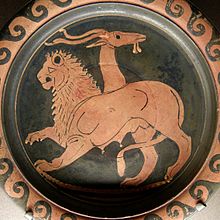 1 a capitalized : a fire-breathing she-monster in Greek mythology having a lion’s head, a goat’s body, and a serpent’s tail
b : an imaginary monster compounded of incongruous parts
2 : an illusion or fabrication of the mind; especially : an unrealizable dream
a fancy, a chimera in my brain, troubles me in my prayer —John Donne
His utopia was a chimera.
3 : an individual, organ, or part consisting of tissues of diverse genetic constitution A hybrid created through fusion of a sperm and an egg from different species is a chimera. —Miriam-Webster Dictionary online See entry

But in the world of the Chimera Chronicles, Chimeras are people who have either the dominant or latent ability to transform into a lion, a dragon, or even a conglomeration.

In human form, Chimeras retain the aptitudes and liabilities of their animal forms. From lions, they have enhanced ability to detect scents, quick reaction times, increased flexibility,  strength and speed, but also hyper vigilance, impulse control issues, and a strong need to find their mate. (Unlike lions, Chimeras are monogamous).

From dragons, they have the ability to sense treasure, and a calculating frame of mind. Both of which can also be a weakness, as well as a strength.

All this power comes with a catch. Chimeras have one true mate. If a dominant chimera does not find a mate by late twenties or early thirties (sexual maturity for Chimeras), the beast  form  (depending on the default) will take over.

The human side is lost forever. 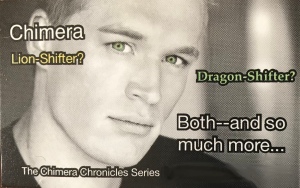