I’m sorry to say that after LION’S PREY (CHIMERA CHRONICLES 4) came back from my beta reader, I realized it needed substantial additions to address my beta reader’s concerns. Several thousand words were added and now need to be edited and polished before I can turn it in for the professional editing of my fabulous editor at Soul Mate, Deborah Gilbert.

Soul Mate has their own timetable for editing and getting a sparkling book out in July is no longer feasible. I promise you I am at hard at work to make sure a true diamond comes out to readers in August.

Meanwhile, Saturday was my one month book-versary of THE LION’S SHARE! 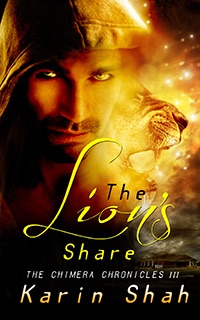 An hour later, Embry braved a brisk wind as she headed to the coffee shop. As the new “guy” on the team, it was her responsibility to “go fetch.” Still, as a bonus, she got to leave the smelly confines of the surveillance van for a few minutes. Ah, the glamorous life of an FBI agent. She almost laughed at herself. She hadn’t been doing it long enough to be jaded. She still loved every minute of it, from the paperwork to day long procedural meetings. Well, maybe not procedural meetings.

She raised her face up to the sun. It would barely scrape sixty today, if she were lucky. She shivered. The only thing she missed about LA was the weather.

As she savored the meager warmth of the sunlight on her cheeks, she almost rammed into a man in front of her. Confronted by the center of a spectacularly formed torso, though covered by a blue hoodie—zipped more’s the pity—she looked up and then further up. Something she rarely had to do at six-foot-one. And saw a clean square chin, high cheekbones, firm lips, slashing black eyebrows and golden eyes. She drew in a sharp breath. His face was familiar, but his eyes made her stomach quiver. They were the same eyes that haunted her dreams—and her nightmares.

“We’re live in downtown Leavenworth, Kansas, where a tense eight-hour hostage situation at the Cooperative Bank and Trust has just come to an end.” Zara Coventry smiled at the camera lens, hoping to convey a sense of compassionate authority, though she felt like something the cat dragged in.

“Here’s what we know. Five men entered the bank on Fourth Street just after 9:00 am. At 5:00 pm, after many hours of negotiation, shots were heard inside the bank and SWAT entered.” She glanced down at her hastily scrawled notes. “Suspects Gleeson Rainey, Demetrius Brown, Paul Cooper, and an unidentified accomplice have been apprehended due to the extraordinary bravery of FBI agent Embry Lane. We expect Agent Lane, who was trapped inside the bank when the robbery began, to exit any minute now. A full news conference is set for 6:45.”

She summoned a more serious tone. “Two other suspects, brothers, Connor and Tyler Gunn, are missing and believed to have eluded authorities. The men are former Army Rangers on parole from the United States Disciplinary Barracks at Leavenworth and are considered armed and extremely dangerous. Law enforcement officials ask citizens to be on the lookout for these men and call the number below if you see them. However, and I can’t stress this enough, do not approach them. I repeat, according to officials these men are expertly trained and extremely dangerous. Call the tip line if you see them, but do not approach.”

This site uses Akismet to reduce spam. Learn how your comment data is processed.